Read this article to learn about, ‘Security Of Remote Desktop Protocol’. 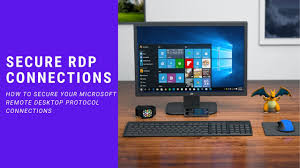 Microsoft’s Remote Desktop Protocol (RDP) is a proprietary protocol that establishes connections between computers across a network, usually through TCP port 3389. In other words, it allows a user to connect to a network from afar via an encrypted connection. RDP is used by network administrators for remote troubleshooting, server logins, and other tasks. When working away from the office, remote workers can still access their emails and files by connecting to the company network over RDP.

It is common practice for cyber threat actors (CTAs) to exploit unprotected RDP ports exposed to the Internet. Once inside, they may be able to spread laterally throughout the network, get elevated rights, access and exfiltrate confidential data, steal credentials, or release various forms of malware. Since CTAs are using a genuine network service, they can blend in with the scenery and perform their malicious acts without raising suspicion. CTAs utilize Shodan and other tools to scan the Internet for accessible RDP ports, and then employ brute force password tactics to gain access to the targeted networks. Dark web marketplaces are awash with compromised RDP credentials for sale.

Recently, it was observed that ransomware versions deliberately attack networks via open RDP ports or brute-force passwords. When the ransomware is propagated manually throughout the whole infiltrated network, the ransom demand increases.

a) Determining whether or not system RDP (on port 3389) needs to be open, and then, if so, requiring VPN access over the firewall for any system that has RDP open;
defenses against brute-force attacks can include the use of strong passwords, multi-factor authentication, and account lockout policies.

blocking all traffic except that going to approved hosts

If at all possible, only allow non-administrator accounts to log in using RDP. Respect the Principle of Least Privilege by giving people only the permissions they need to do their jobs, and

documentation and analysis of RDP records in attempts for suspicious behavior and save this data for at least 90 days. Make sure that only approved individuals can use this service.

b) Verify RDP port security frequently if it’s not necessary.

c) Make sure everything in the cloud is set up and functioning according to the cloud provider’s recommendations. After your cloud environment is set up, make sure Remote Desktop Protocol (RDP) ports are disabled unless necessary for your company’s operations.

d) Make sure all client and server software is up to date by enabling automatic Microsoft Updates.

After reading this article, you might have got a good knowledge about, Security Of the Remote Desktop Protocol. You can read this article to learn about, how to start a Microsoft store client in RDP.

You can also read this article to learn how to buy Admin RDP.

Visit our website, 99rdp.com to know about the different types of RDP available with us.